The Top Twenty Countries with Highest Sex Drives in Women have been revealed, based on the analysis sexy admissions from women around the globe who have self-assessed their sex drive. Shockingly, many assert that their sex drives are so high they could be considered to be nymphomaniacs.

The Top Twenty Countries with the Highest Sex Drives in Women are:

Countries where women have a High Sex Drive

Countries where women have a Very High Sex Drive

The study, conducted by Victoria Milan – a dating website for married and attached people looking to have an affair – looked into the profiles of  more than 1 million of its active female members from 20 countries to determine where in the world the most sexually charged ladies are - and how they view their own sex drive.

Scandinavian women have the highest sex drive in the world, according to the study. Ladies from Finland (79%), Sweden (78%), Denmark (76%) and Norway (76%) confess they love sex - what else is there to do when it’s freezing for six months of the year!? These women enjoy sex so much that Swedish (39%) and Norwegian (35%) women could be considered borderline nymphomaniacs. The only nationalities that comes close to the Scandinavians’ irrepressible sexual appetite are beautiful, passionate Italian women - 34% say their sex drive is way above the average – and the vivacious ladies from Portugal (33%).

Paid escorts have been outlawed in Ireland, so it’s a good thing that 75% of Irish women, known for their confidence and sassy personalities consider themselves as having a high sex drive, and one-quarter (26%) say their appetite for sex is well above the average level. 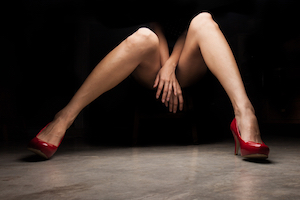 Seven out of every ten fiery Spanish women (71%) have a high sex drive yet they are know for their jealousy and being able to turn their affection on and off like a light switch. Their libido can vanish instantly if they feel they aren’t getting enough attention and affection from their man. 27% say they consider themselves to well beyond the sexual average, teetering on the nymphomaniac level. Surprisingly, the analysis showed Austrian women who are usually viewed as reserved, consider themselves at the same level – 27% have a sex drive higher than the average woman.

German (71%), South African (70%), Swiss (70%) and Australian (71%) women couldn’t be more different, culturally and geographically speaking, however they have almost identical ideas about their sex drive - approximately seven out of every ten of these women say they have a high sex drive.

American women are known for their enthusiastic approach to life and their attitude towards sex is about the same. 30% - or a third - are sex obsessed with above average sex drives, while almost a quarter of Polish women (24%) say they same, destroying the myth they are gorgeous but cold.

Czech women are recognised as having the prettiest faces in the world - disappointingly, they gave the lowest ratings when it comes to sex drive. Just 47% of Czech women say they have a high sex drive, and a mere 20% like to think of themselves as being more interested in sex than the average woman.

French and Dutch women view themselves in the same way: only 21% of both nationalities consider themselves demons in the bedroom and potentially being considered nymphomaniacs. The French are too romantic and Dutch women are beautiful but serious, believing everything should be enjoyed in moderation - even wild sex.

Belgian women are more reserved and reluctant to admit to being highly sexually charged and while they are beautiful, they are bordering on being called boring. Only 60% say they have a high sex drive, and just one-fifth of women confess to having sex on the brain all day, every day.

Founder and CEO of Victoria Milan, Sigurd Vedal, said the study revealed that women’s sex drives increase based on their standards of living. The more affluent and comfortable life is in a certain country, the more time the people have to enjoy sex.

“Scandinavian countries are globally recognised for their amazing standards of living - healthcare, salaries, living conditions and career opportunities are among the best in the world.

“The analysis shows that the more comfortable life is and once these elements have been taken care of, women feel powerful and sensual - and have the time to indulge and invest in their sex life. Women love sex, and they deserve it to have it whenever and wherever they want,” Mr Vedal said.