The topic of menopause and affairs may seem like a bit of an odd pairing. However, it is a common occurrence for women going through menopause to feel a lack of desire, which in turn can cause them to seek out an affair. Understandably, this can be very difficult for the spouse to deal with. The wife may feel frustrated with her husband’s lack of understanding and his unwillingness to try new things in bed. She may also feel angry that he doesn’t seem to notice how upset she is.

The husband might feel guilty that his wife is unhappy in their marriage, while also feeling angry at her for her affair and jealous because of the time she is spending with another man. He may not know how to react or what to say, so he chooses not to say anything at all.

In order to fix the relationship, your first step should be communicating with each other. This means talking about what you are feeling and saying what you need from your partner—don’t hold it in! You need to let your feelings out so they won’t build up inside and become too much for you to handle. Do your best not to place blame on either party; instead, try focusing on the needs of both people involved. 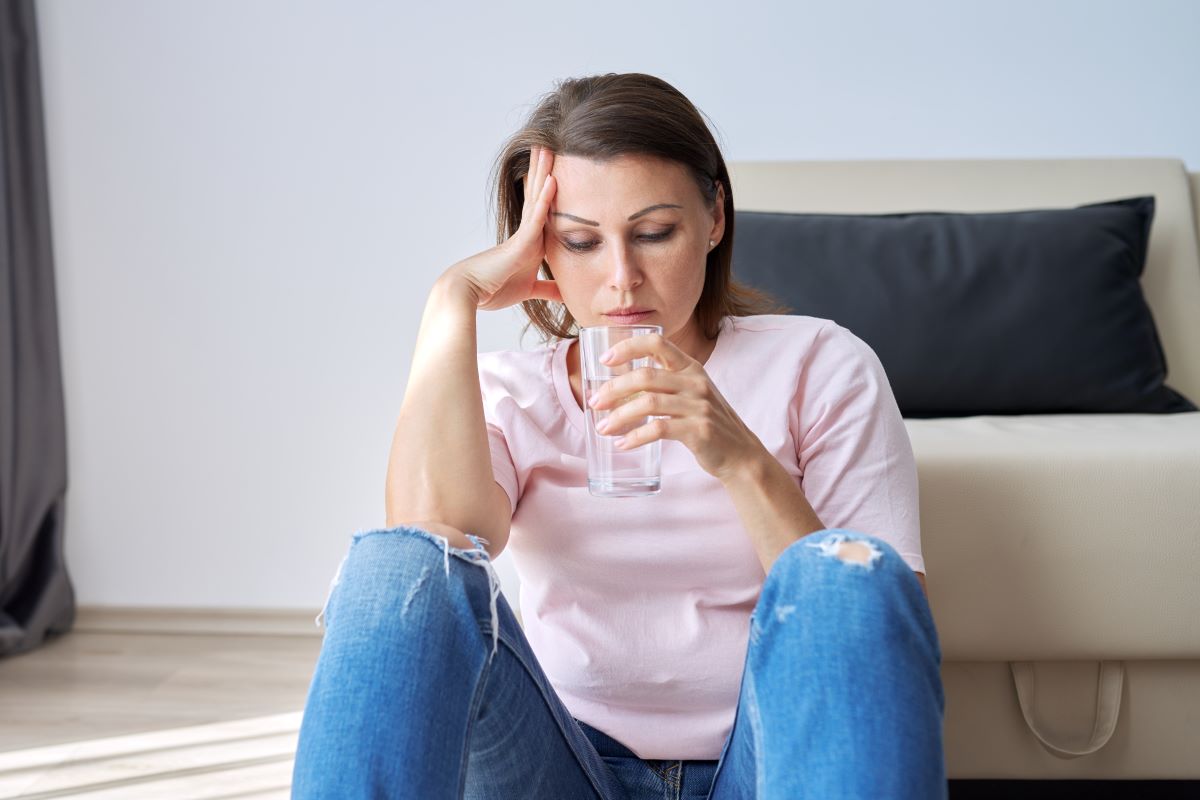 Menopause is the time in a woman’s life when her body stops making eggs and she stops having menstrual periods. It happens because of changes in the levels of certain hormones, particularly estrogen and progesterone, during and after menopause. Every woman goes through menopause at some point between the ages of forty-five and fifty-five; the average age is fifty-one.

In addition to stopping menstruation, menopause causes many other changes in a woman’s body:

These are sudden feelings of intense heat or sweating that usually last just a few minutes but can happen several times a day. Hot flashes can start as early as two years before menopause.

Many women have less control over their bladder during this time.

This is common, though it may not be entirely caused by the hormonal changes associated with menopause. Women gain an average of ten pounds during the year prior to onset of menopause; aging alone causes an average of two to three pounds per year from age twenty-five onward.

What Causes Affairs During Menopause?

During menopause, hormones are still out of whack and it’s not uncommon to be dealing with some side effects, such as mood swings. Some women might find themselves in a rut, with their relationship being less satisfying than it used to be. Others might feel like they can’t keep up with their husbands anymore and start to resent them. No matter the reason for her feelings about her husband, the wife may start looking for attention elsewhere.

Another reason for affairs during menopause could be that it’s harder for women to reach an orgasm at this time than before and they need more stimulation than usual to reach orgasm. It becomes even more important for them to feel intimate with their partner in order to get the physical satisfaction they need.

Can The Menopause Cause Relationship Problems?

The menopause can cause a number of relationship problems, because it affects both women and men. It can make communication between partners more difficult because of mood swings and sleep issues, but it can also cause problems related to sexual activity.

It is important for partners to discuss their feelings about the menopause and its side effects before, during and after the process. Some couples find it helpful to seek counseling from a therapist or doctor who specializes in women’s health.

The menopause is a time of physical, emotional, and hormonal changes. As you go through this difficult time in life, you may notice that the changes you experience are not just physical, but can also be emotional.

One potential emotional effect of the menopause is a change in your perception of your partner. This could mean feeling less attracted to them physically or less pleased with the sex that you have with them. It could also mean that your partner’s behavior annoys you more than it used to and upsets your sense of balance. The frequency and intensity of arguments might increase, even if there is no real reason behind it.

As a woman going through the menopause, you may feel sad that your body has betrayed you and made it harder to have a satisfying relationship with your husband or partner. You may find yourself wishing that he could just magically know what to do to make things better. Or perhaps you have even started having fantasies about other people—someone who doesn’t know anything about this exhausting period in your life… Someone who would never have to know what it feels like to be neglected or criticized for something they can’t help… Someone who could make everything better without fail with a few magic words or caresses.

The Link Between Menopause And Affair

Menopause is a period in a woman’s life when she stops having periods, usually because she has reached a certain age.

In menopause, the ovaries stop producing eggs and producing estrogen, which causes many changes in the body. One of these changes is the decrease in production of the female sex hormone estrogen. Less estrogen means less vaginal lubrication, less pleasurable sex, and more painful intercourse.

That’s all for now from the “Menopause And Affairs” content prepared by Victoria Milan for you! If you are looking for more content like this, you can visit our blog and stay tuned.

FAQ About Menopause And Affair

Can Menopause Make You Fall Out Of Love?

The question of whether or not menopause can make you fall out of love is one that many women have been asking for years. While this may seem like a strange question, there are many women who find themselves falling out of love with their partners during the menopausal years. There are many factors that can contribute to this process, but one of the most significant ones is the change in hormones during menopause. This can cause mood swings, depression and anxiety which can make it difficult to maintain a healthy relationship with your partner. Some women find themselves feeling less attracted to their partner when they reach menopause because their sex drive has decreased as well. This isn’t always the case though because some women still enjoy having sex even when they are going through this stage in life.

Can Menopause Make You Want To Leave Your Husband?

How Does Menopause Affect The Husband?

Although it can be difficult for women going through this change in their lives, men also experience changes when their wives go through menopause. The relationship between husband and wife can be affected by this transition as well as other factors such as changes in lifestyle and financial worries that can arise from the additional cost of medications needed during the transition period.

Do Relationships Break Down During Menopause?

The answer is that it varies from person to person. For some people, their relationship improves after the menopause transition is over, while for others it gets worse. It depends on how both people feel about what’s happening in their lives and how they deal with the changes that come with menopause.

How Does Menopause Affect A Relationship?

While some couples find their sex lives improving during this phase of life (because their bodies are no longer under the influence of fluctuating hormones), others find their sex lives declining (because of those same fluctuating hormones). Some couples find themselves arguing more than ever before; others find themselves feeling closer than ever before.

Does Menopause Make You Not Want To Be Touched?

Menopause can be a time of great change. Your body is going through a lot, and so are your emotions. It’s normal for some women to feel more sensitive or emotional during this time. But what about those who feel less interested in sex? Does menopause make you not want to be touched? It can be frustrating when you go through a phase where you just don’t feel like being intimate with your partner anymore. But it’s important to know that this isn’t something that just happens during menopause — it happens in other situations too.

Why Is My Wife So Mean During Menopause?

Some menopausal women become more irritable and impatient, while others become less emotional and more rational. Some women experience both types of mood swings during menopause. If your wife’s behavior has changed recently, it may be because of her transition through menopause. If you feel that your wife’s behavior is extreme or abusive, please talk to her about it and let her know how it makes you feel. If she doesn’t respond well to this conversation, consider seeking professional help from a therapist who specializes in working with couples going through major life changes like menopause.

Can Menopause Cause Change In Personality?

Some women experience a change in personality during menopause. This can be caused by many factors including hormonal changes and stress. Hormone levels fluctuate during menopause because the body is no longer producing as much estrogen as before. This can cause mood swings and irritability as well as other psychological symptoms such as depression or anxiety. Stress can also contribute to changes in personality during menopause. A woman may feel pressure from work or home life, which can make her feel stressed out and anxious about her future without children or a partner around her age group who are still having children together while she is going through this difficult time in her life.

How Can I Be A Good Husband During Menopause?

The menopause transition is a time of significant change for women, their bodies and their lives. The good news is that most women experience menopause relatively smoothly. However, some women struggle to cope with the physical and emotional changes of menopause. Menopause can be challenging for husbands as well. It’s important to remember that it isn’t just your wife who is going through this process – but you too! Be patient and understanding when you’re having a bad day or week. Don’t expect her moods to be the same as they once were. Don’t take her complaints personally. Help keep the house clean (even if it’s just picking up around the house). Remind her how beautiful she still is inside and out.