The success of an affair depends on the amount of oral

It’s no secret that in every couple one person is more in love than the other, and a revealing new study has exposed a barometer to measure the level of affection. The sexy new study has revealed that the giving and receiving of oral sex in a relationship clearly shows who is more in love.

The study, conducted by Victoria Milan – a dating site for married and attached people looking to have an affair – took the opinion of 9,107 of its active male and female members to find out how important oral sex is in a relationship, and who’s giving and who’s taking it the most.

Performing oral sex has long been a sign of intimacy and trust between lovers and the importance of oral sex in a relationship hasn’t wavered. 72% of women and 85% of men say they think oral sex has a place in every bedroom and the performance of it shouldn’t taper off as the years go on.

Lovers of oral sex can rejoice – the majority of people – almost three-quarters of both genders – say they enjoy performing oral sex. That’s 77% of women and 72% of men. Not surprisingly, when it comes to receiving the approval rating soars. 89% of women and 94% of men are big fans of receiving oral pleasure. 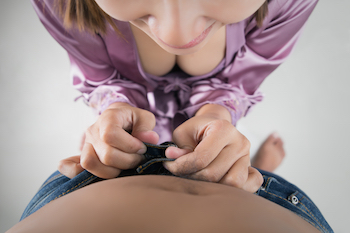 When it comes to having an affair, oral sex needs to be on the menu. Absence of it is a deal breaker according to 65% of women and 68% of men who say they would end an affair if they weren’t receiving the licking and sucking they so desire.

For those out there who are experts at giving oral sex but aren’t great at much else in the bedroom or don’t have a great physique, they’re in luck. 57% of ladies and 66% of gents say they’d stay put to continue receiving the exceptional oral pleasure.

In the Netherlands, a country known for equality, it should come as no surprise that the men (80%) and women (81%) love giving oral sex equally.

The beautiful women from Poland are known for their skills in the bedroom, and their sexual repertoire includes a fondness for giving oral sex (78%). Nearly three-quarters of Polish men say they also take pleasure in being the giver of oral sex rather than the receiver (73%).

South African (77%) and Hungarian (75%) women know how to please their men, and they truly enjoy doing so. Their men relish taking care of the ladies with a good licking – South African (74%) men enjoy it slightly more than Hungarian men (71%).

Italians are known for their love of delicious treats – and the men (81%) enjoy consuming their women as well while in the throes of passion. 76% of Italian women say they enjoy performing oral sex for their lovers.

Similarly, the Czech Republic and New Zealand have identical levels of interest in the most intimate of acts. 71% of the women from both countries say it’s an item on the menu they like to serve up. 76% of men from the Czech Republic are likely to relish reciprocating, while just 68% of Kiwi men say they wouldn’t mind returning the favour.

Norwegians are all about equality, and the men and women there enjoy giving oral sex almost the exact same amount. 70% of women and 69% of men say it’s a treat for them to taste their lover.

Finnish (68%), Swiss (63%) and Portuguese (68%) men are more interested in tasting their lovers, while the women are almost as enthusiastic. Finnish women (64%), Swiss misses (61%) and Portuguese princesses (60%) will return the oral favour.

Founder and CEO of Victoria Milan, Sigurd Vedal, said that oral sex has long been known as an act of ultimate intimacy, desire and trust.

Do you enjoy performing oral sex?

Do you enjoy receiving oral sex?

Are you most likely to perform oral sex when you are in love with the person you’re having sex with?

Would you end an affair if your lover was not interested in performing oral sex?

Would you continue an affair with someone who was great at oral sex, but not much else?

Do you think oral sex is an undeniably important part of a sexual relationship, a ‘must’?

Do you enjoy performing oral sex?