5 most common reactions of men rejected in the bedroom

Rejection in the bedroom leads to a broad range of responses and a recent survey has uncovered the most likely reactions of men who are faced with tantalising temptations in the bedroom, and experience these being whisked away at the last moment.

The survey, conducted by Victoria Milan – a dating website for married and attached people looking to have an extramarital affair took a look behind the closed bedroom doors of 9,507 of its active female members from 23 countries to discover how men react when they are refused by women in the bedroom.

Getting angry or behaving aggressively is the #1 most common reaction from men who are denied the pleasure of a passion session. It’s likely the show of anger is to cover the deeper feelings of rejection and embarrassment. Women who put the brakes on say they have experienced this alpha male type reaction from Hungarian, Irish and Portuguese men. 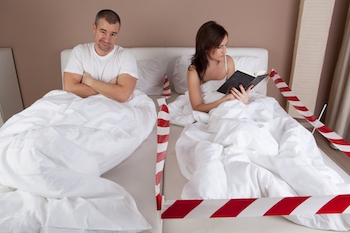 The silent treatment followed by a dramatic door-slamming exit is the second most likely reaction from a fellow who only made it to foreplay before being flung out. Refusing to discuss the issue or negotiate is common behaviour from Austrian, Swiss, Finnish, Norwegian men.

Turning on the charm and trying to convince his lover to relent is the third most common reaction women see when they put a stop to a potential love-making session. Reasoning, pleading and manipulation through saying what he thinks she wants to hear are all tactics that are tried by men from Czech Republic, Greece, France, New Zealand and Poland who have been barred from the bedroom.

Taking it like a man and making a joke of it the rejection is the fourth most likely reaction or spurned lovers, and probably the most appealing outcome of an awkward bedroom situation. Men who are understanding of their lover’s requests to stop and don’t apply pressure on her to continue are usually from Australia, Netherlands, Sweden, United Kingdom and United States.

The most shocking behaviour reported was from women who witnessed the rejected lover pick up his phone and immediately start swiping or texting to find someone else who would put out. Typically, such cads hail from Belgium, Germany, Spain, Italy, South Africa and leave little question as to whether the relationship with anything other than physical.

Founder and CEO of Victoria Milan, Sigurd Vedal, said that rejecting a man in the bedroom is a woman’s right, and it’s a man’s right to have an honest reaction.