Halloween costumes inspires 1 in 3 women to have an Affair

During Halloween, couples should be more scared of their significant other starting an affair than ghosts and ghouls, as a new survey has revealed 66% of women have declared Halloween a sexy event and dressing up for it turns them on.

One out of every three women say that just like Christmas, Halloween is a great excuse to have a ‘free night’ where anything can happen – most likely an affair with a lucky man that happens to be in the right place at the right time. 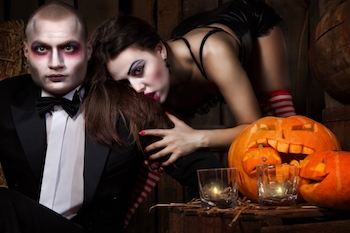 The lucky man can expect his wildest fantasies to come true, in the form of sweet, sexy and a little bit scary with the following costumes being the most popular with women looking to indulge in some Halloween hanky-panky. Here are the most Popular Costumes for Halloween 2017 among surveyed women.

Founder and CEO of Victoria Milan, Sigurd Vedal, said Halloween is the best time for individuals to be creative and let their wildest fantasies out.

Halloween is the day that allows everyone to express themselves creatively. Those who are sexually charged take it to another level and it becomes an evening of intrigue, mystique and fantasy, generating a more adult version of trick or treat, Mr Vedal said.

For more information, please contact press@victoriamilan.com Victoria Milan is one of the world’s leading discreet social networks for men and women seeking a secret affair. The service was launched by media executive, Mr. Sigurd Vedal, in 2010, and has today become one of the world’s fastest-growing and leading social networks for discreet extramarital affairs, surpassing 5 million members worldwide in more than 33 countries.