Tattoos could be the new sign of sexual availability

People with tattoos are more likely to have a passionate extramarital affair, a new study has revealed. Shockingly, those dabbling in the exciting world of adultery are more likely to be women than men, and there’s a movement of women with secret tattoos revealed only in the most intimate, adulterous moments.

The study, conducted by Victoria Milan – a dating website for married and attached people looking to have an affair – asked to more 3 million of its active members across 15 countries about their tattoos.

The study shows that Scandinavian women are most likely to have tattoos: Denmark (42.3%), Finland (41.1%) and Sweden (40.8%) are the top three countries on the list of 15. These women, who are active members of Victoria Milan, use tattoos to show their personality, their rebellious streak and independence. 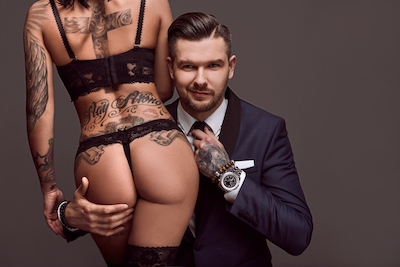 Statistics show that tattoos are more popular with women than men across the 15 countries – the percentage of females having tattoos is on average 25% higher than the males from the same country. In Italy, 35.8% of signoras will have a tattoo, while just 29% of their men will. One-third (33.9%) of Dutch ladies have ink, while only one-fifth (22.1%) of Dutch men can say the same. 28% of Spanish señoritas have tattoos, but only 19% of the señors have gone under the needle.

Some women aren’t as keen to publicly express their darker side and indulge in secret tattoos. To find out a woman’s taste for body art, gentlemen will have to gain her trust in order to be able to explore and find the secrets tattoos in the most intimate moments. The most likely places to find secret sexy tattoos on women are Finland (15.8%), United Kingdom (11.1%) and Ireland (10%).

Founder and CEO of Victoria Milan, Sigurd Vedal, said the results revealed a sexy new side to the world of body art.

“Tattoos are a sign of personality, creativity and rebellion, and now we know they are a sign that the person probably has a great sex life. This may spark a worldwide hunt to discover the craze for sexy intimate tattoos, as men like to discover things that are seemingly just for them,” Mr Vedal said.