Last minute requests from women in the throes of passion are common, but vary wildly from country to country according to a recent study. Whether they are delay tactics or devious demands, the Top 10 Last Minute Bedroom Requests have been revealed.

The survey, conducted by Victoria Milan – a dating website for married and attached people looking to have an extramarital affair – asked 12,104 active male members from 21 countries what the most popular last requests are of women they are taking to bed.

Women from Spain and Ireland like to do it in the dark, with men from those countries saying a last-minute request for the lights to be switched off is the most popular thing they’ll hear whispered before the magic moment. 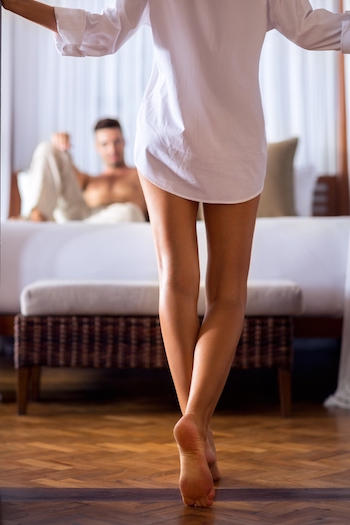 The Swiss and Austrian ladies are known for being adventurous and active in the bedroom, but they like to keep these activities a secret from the world, safe from peeping eyes. Austrian and Swiss men say these women will only perform if the curtains are closed when it comes to crunch time.

Norwegian and Danish ladies are no strangers to bedding down with strangers – but are responsible when they have a random romp. Men from Norway and Denmark say in the last moments, Sccandinavian women are most likely to whisper their request for their lover to put on a condom.

Women from the United States and Australia are known to be boundary pushers in the bedroom, and it’s reasonable that their last request of their lovers is that he takes a shower before she indulges him. As she’s probably tempted him with the thought that she’ll be going places he has never dreamed of, he’ll be quick to bubble up.

Fresh breath when you’re getting fresh is important to the ladies from Hungary and Italy who want their lovers to be minty and don’t mind saying so. Hungarian and Italian ladies won’t hesitate in asking their man to pause the foreplay to brush his teeth.

The romance of the French and Portuguese is not lost in the throes of passion. When it comes to the point of no return, the gentlemen lucky enough to bed these women say they have to indulge a last request for music to create ambience.

Socks and sex go together like pickles and ice cream – and should never be seen in the bedroom. Women from the Czech Republic, Germany and Finland will insist their lover removes his socks before she’ll let him have the Holy Grail. Socks in the bedroom for these ladies is a deal breaker.

A little Dutch courage goes a long way with women from the Netherlands fully embracing the expression literally, and South African ladies joining them for a last drink. Men from the Netherlands and South Africa say the women they take to bed usually ask for one more sip of wine or a shot of something stronger to give them that last blast of confidence.

No matter how quickly women from the United Kingdom and Sweden hop into the sack with a man, they aren’t interested in doing it with items of clothing restricting them. The men from these countries say the last request of Swedish and British women is to be undressed, bringing to mind bodice ripping images rather than slow and sexy stripteases.

Founder and CEO of Victoria Milan, Sigurd Vedal, gave some words of advice to would-be lovers.